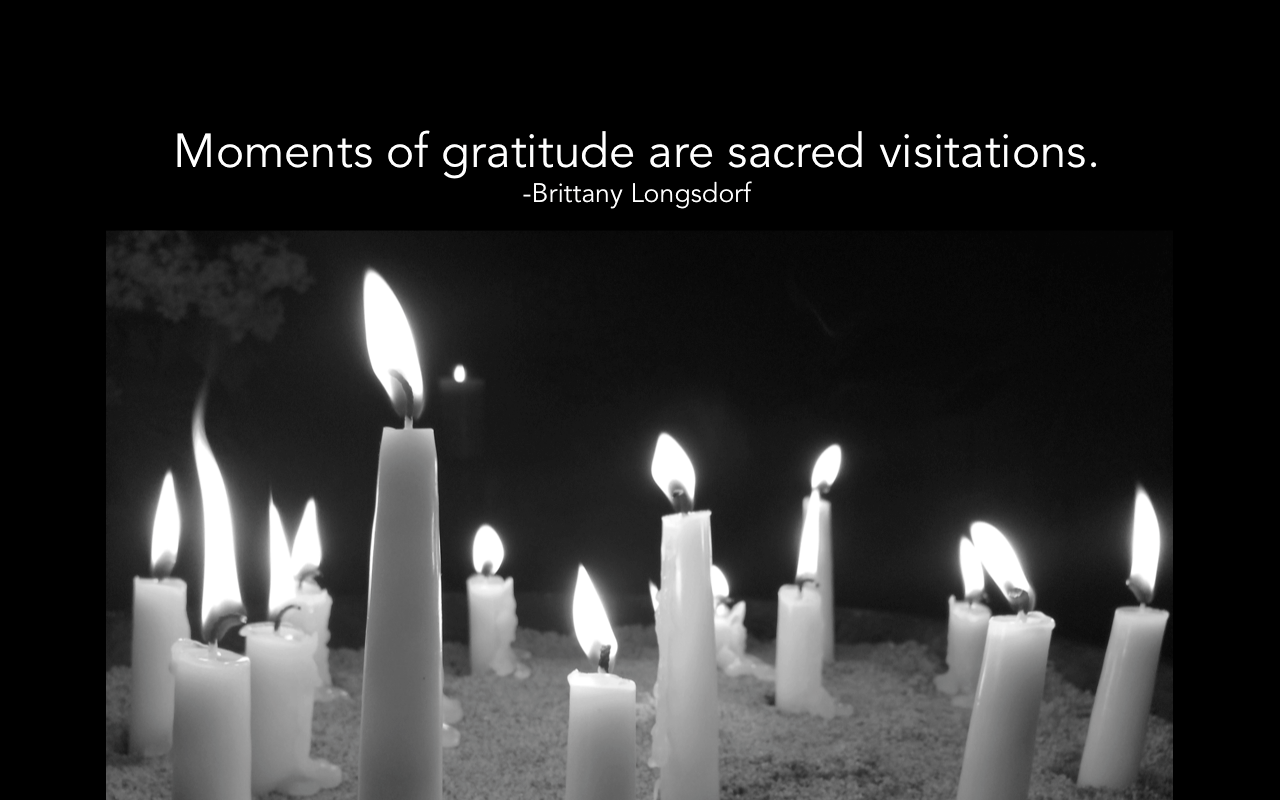 Every Thanksgiving my family goes around the table and each person says something that they are grateful for before we sink our teeth into some turkey and stuffing. At times it has felt perfunctory, and eventually it became redundant. The ‘thankful for friends and family’ answer became so common that in recent years we implemented a new rule that there could be no repeats, so each person had to think of something different to be thankful for. A couple of years ago a friend of mine said they were grateful for a fork and praised other utensils around the table. Gratitude in its many forms, silly and serious, is a deeply important thing to consider during the holiday season.

This advent season, in the transition from Thanksgiving to Christmastide, I want us to consider moments of gratitude as visitations from the Sacred. When I started out in the work of college chaplaincy I became consistently overwhelmed with putting on multiple programs every week, offering pastoral care, coordinating worship, and doing higher education committee work. It surprised me that while doing the work I loved, I found my self in a very dark spiritual place. Somehow the rote maneuvers of program planning and the massive amount of logistical details to keep track of clouded my view of sacred purpose. I sought out a spiritual mentor and asked the question that had been trembling in my heart for months, “Do I even believe in God anymore?”

She responded with a story. When my mentor was a young chaplain starting out in New York City, she also felt the same overwhelming sense of distance from the Divine. She was riding a train home late one night from a program and in her train car saw a father and daughter all dressed up and laughing; it looked like they had just come home from a Broadway show. The little girl roared with laughter and held her father’s hand tightly as the train swayed on the tracks. Something inside my mentor felt the urge to just whisper a soft “thanks” into the universe. “That’s how I know there is a God”, she said to me. Moments of gratitude are sacred visitations.

When the Angel visits Mary she is full of fear, awe, and wonder. She is reminded of the wide and deep webs of the Divine that surrounds her. When we feel those deep moments of gratitude and whisper ‘thank you’ into the ear of the universe, we embody that same revelation, that sacred visitation that reminds us of our purpose and our Creator. This advent season let us readily recognize those moments of gratitude and be grateful.

Spiritual Practice:
“Moments of gratitude are sacred visitations.” Spend a few moments allowing gratitude to emerge within you. For what this day do you whisper “thank you”?
Where else is God revealed to you in the Advent season? What are the sacred visitations in your life?